As we wave the summer goodbye and the leaves pile up on the ground i found myself looking for some music to fit the Autumn mood. I mean, we’ve all heard of a summer hit but an autumn hit? But rather than just searching “autumn,” in Spotify i went to a bit more trouble and asked 20 Swiss musicians for their Autumn song favourites. You’ll find the individual tips below and the whole playlist here. Happy listening.

«I have no idea what this song is about, but it makes the new colours on the trees a little more vivid.»

«Beautiful is the autumn crocus. Finally Kauz is open again and, after many months, I have a weekend off  So... Boom-Boom-Zick-Zack-Motorik vs. distorted speech. Hurrah!»

«The name says it all. A hymn to autumn and still good to listen to all year round.»

«No one ever says a word about so much that happens in the world - This feeling, which I perhaps first suspected 18 years ago, comes over me so often, especially when the days are getting shorter and politics are silent, while the first hurricane hits Europe's shores. And this song comforts me again and again, Dance Revolution!»

«The wet leaves under your feet, the rainy sky, the walls of the 60's blocks, the thoughts wandering...»

«The most melancholy and at the same time most beautiful Lyrics 2019:
And I've tried having faith
But I'll rot like a dove
'Cause I've always been scared of loving someone just a little bit more than I'm loved
Losing is fine
Everything is fine»

«An "autumn song," because of the Backstreet Boys style beats. They make me feel old and withered, because they are apparently hip again and I am experiencing this for the second time.»

«The song is perfect for accompanying a hungover train or car ride through autumn afternoons where too much direct sunlight can be literally devastating.»

This song with a beautiful message has been with me since the beginning of autumn 2019.
Have a look at the song (before you start to stress out here).»

«This is an old classic, but unfortunately it fits into our time again. Still full of hope for next year.»

«I can listen to this song when I'm in a good, bad or neutral mood. Just the thing to enjoy before winter approaches.»

«His new album is a blast.»

«This song sounds like autumn, morning dew to me. Clear, cool and fresh. Perfect to enjoy under the October sun.»

«The hook is super smooth!»

«Perfect music to roast chestnuts to.»

«A pinch of autumn melancholy paired with strong lyrics. This song is representative of the best album so far this autumn.»

«Natalie Beridze and I started writing this track in autumn three years ago. Now, exactly three years later, it was released on CES Records, Tbilisi. That's why this is my autumn tip.»

«The days become shorter, darker and colder. This makes my mind more sluggish, which is why, for me, ponderous music is part of it. Fits perfectly to a rainy autumn Sunday.»

«Gino, the singer of DUS and my best friend, has just travelled to South America for half a year. It's good to hear his voice!»

«The first song of Benjamin Amarus' new live EP is autumnal and melancholy, but confident somehow. And pretty great.»

«An ode to peace in solitude, the bliss of indulgence, the sadness of being.»

«Flames like the sun dried out the sea, left with dirty sand beneath my feet. - Feels to me like the year is slowly coming to an end; and there's not as much left of the big lakes and rivers as there was two months ago - as if they were drying up.»

«I chose this song because both the slightly sad sample and the content of the lyrics capture the feeling of transience during autumn as well as its positivity, which is very nicely hidden in it.  At the same time you can nod along to it.» 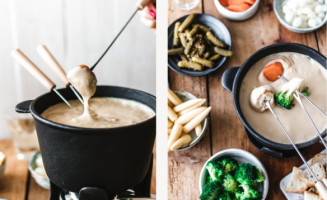 Vegan fondue doesn't have it easy in Switzerland as we live in a country that is proud of it’s melted cheese traditions and fondue is as much a part of winter life as Christmas and Skiing. But the next time you have a fondue you no